Recently we had the opportunity to participate in a Travel Alberta TV commercial being shot in Alberta's beautiful "Waterton National Park" as technical advisors for the kite related portion of the commercial. Sharon and I had a ton of fun being able to see the inside skinny on how things get done in the TV commercial business.  The director anticipated that our input would be needed around noon so we explored the canyon before heading over to the flying site next to the Prince of Wales Hotel.  Thank goodness we had plenty of kites with us to fly that day. It helped to break the day down into manageable segments. The winds were just crazy in the Waterton Park area that day (as it is most days, actually) with wind gusts hitting over 100 km/h coming over the lake and up the hill at the Prince of Wales Hotel location. We tried flying a variety of the larger kites such as the 8m and the 6m Powersleds to get our "Air-Banner" system in the sky but it was too much wind. We ended up having to downsize to a 4m parafoil to do the job but that was short lived as well. We also managed to get the KAP setup working and got some great shots of the immediate area but the rig was swinging all over the place and had me a little concerned that something was going to be destroyed. We were using 1600# test spectra flying line tied to the bumper of the truck. It did well but the bridles on my lifter kites didn't fair so well. Smaller kites were the key but they could only take so much too. My 7' Rokkaku was able to do the KAP work, which shocked me because it was only the framed kites that we were able to handle all the wind on that day. As it turned out, it wasn't until the end of the day that the crew arrived from filming in other parts of the park to do the kite portion of the commercial. Near supper time now, the winds had suddenly dropped off with barely a whisper of a breeze and there was concern the shoot would be delayed for the next day. The prop guys came out with a leaf blower and thought that would help create some wind. We got a good belly laugh watching this procedure and the actors ended up having to run with the kites to make them fly. The sun was going down quickly and the film crew was forced to bring out huge massive lights to flood the area with enough light to complete the shoot.  We made small adjustments to the kites for the windless conditions and the actors required a "long line launch" in a very limited space (from the edge of a steep hill). The crew was fabulous though, and persisted, maintaining an excellent sense of humour, especially admirable after such a long, hot day. After numerous takes and retakes, the film was “in the can” so to speak.  All participants were exhausted but delighted that day was a great success.  Kudos to the entire cast and crew for a job well done!  Check out the finished product here: 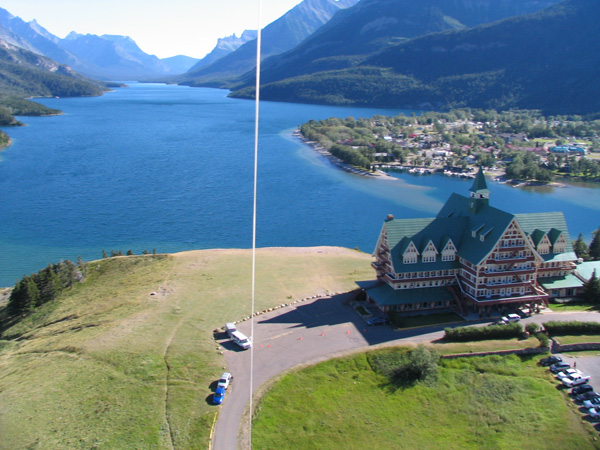